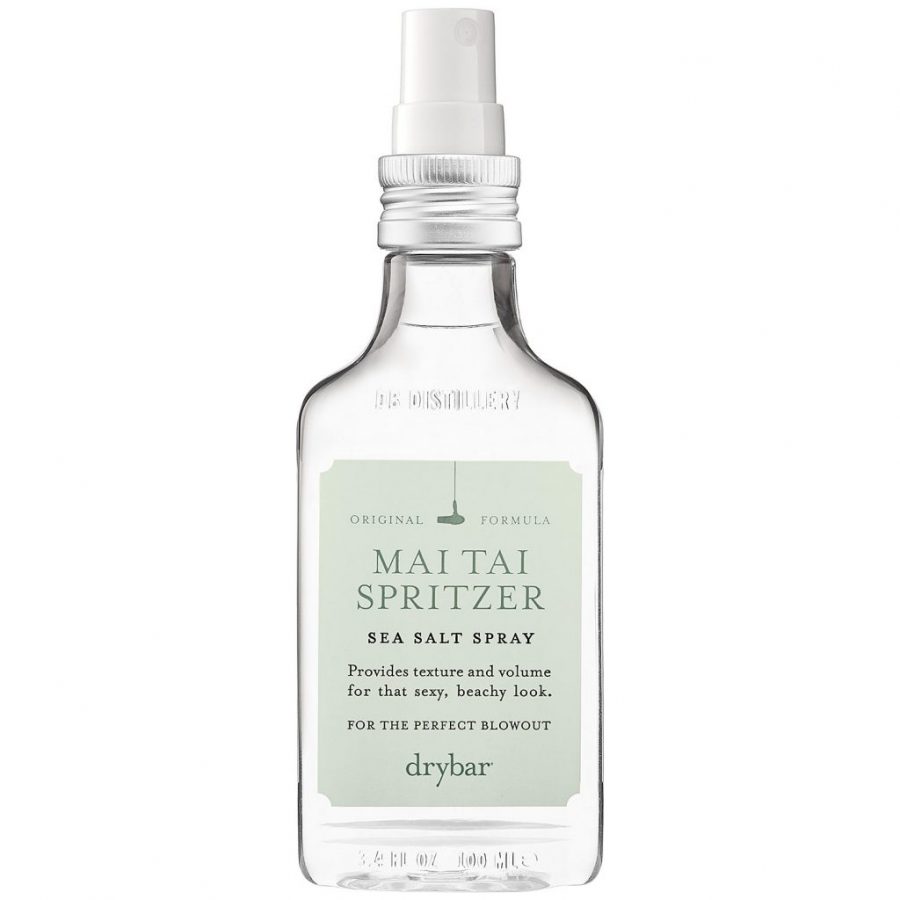 May you never forget the first rule of beach hair: not all salt sprays are made equal. Few of them fail to do what they promise — I mean, how hard is it to balance out a saltwater solution — but too many salt sprays try to do too much, and for people who already have livelier hair than can be controlled, this is often a problem. I don’t need too many conditioning oils or fruit-flavoured scents; they make my hair heavy and damp. And I’ll pass on the shimmery stuff as well, because my hair is just too precious for cheap sparkles and DIY projects, and I’m more into that shine-from-within thing anyway. All I want is a good salt spray that smells like the sea (even if I’m not there right now); you know, that watery, cool scent of marine greenery and the dry, rustic scent of wood bleached to whiteness by the sun. Enter Drybar’s Mai Tai Spritzer Sea Salt Spray ($31) — it wasn’t what I wanted exactly, but surprisingly, it turned out to be something I enjoyed.

The strange thing about this spray is that although it possesses many qualities I would usually dislike, the positives seem to outweigh the negatives. For instance, yes, this time, the book should be judged by its cover because the spray does smell heavily like a tiki drink at a seaside resort, but oddly, it doesn’t bother me. That’s partly because the spray lends enough volume that my hair is often too tall or swept back for me to smell it, but also because I have a tendency to touch my hair often, and this product moves quite well throughout the day. I know there’s a fragrance introduced into the spray — it’s a coconut-rum scent that occasionally seems to carry a magnolia or peace lily undertone — and at first blush, it was a little overpowering, but the more I fiddled with my hair, the more it seemed to respond to the heat from my hands. Long story short, it faded well and the coconut scent seemed to give way to a cool lime underneath, and I was impressed that the perfume of the spray could be tamed.

Composition wise, the spray is fairly balanced, which should surprise no one because Drybar’s a pretty excellent brand when it comes to styling and haircare. Personally, I could do without the avocado oil — oil and salt doesn’t mix well on my head of hair — but the aloe and algae extracts are a welcome addition, soothing inflammation on the scalp as you work your fingers through. There are seaweed extracts in the formulation which act as conditioning agents, but I’m more of an occasional user, so I can’t say I’ve seen any lasting benefits from the spray. A few spritzes go a long way with this little number — just like with actual mai tais, one would assume that the general rule would be “the more the merrier,” but, just like the real thing, too much and you’re almost guaranteed a headache from the scent alone (or at least an itchiness in the scalp from over-salting in this case).

In all, I’m rather impressed with Drybar’s Mai Tai Spritzer Sea Salt Spray, especially because it’s the only tropical-scented product I’ve actually enjoyed in a long time. If I’m being honest, though, this isn’t The One. While it works well, I’d prefer that scent diluted many times over, and either way, this spray is much better for a by-the-bar tousle than genuine, just-came-out-the-water grit, which is what wild, uncontrollable hair like mine needs. The search continues, but for now, I’m quite happy with this salt spray — it doesn’t smell like the beach, but it does smell like vacation, and for now, I’m just going to treat those as interchangeable concepts.

Why You Need Rose Oil In Your Beauty Routine
1 Comment